Tuesday morning on her 5th birthday, Bella found a beautiful figurine of Tinkerbell on her nightstand. She was in awe all day of who possibly brought the lovely statue. Was it the Paci Fairy? Or maybe the Tooth Fairy? Or MAYBE it was Tink herself?? She swears she has heard tinkling sounds coming from her bedroom since.
I love that Hubby helped create this sweet magical memory for Isabella. He picked it out especially for her. It is similar to those "wooden" Willow figurines at Hallmark but it is Tink and she's pretty colors. The message at the bottom says "Let Your Dreams Blossom." He's such a wonderful daddy.

Today Ava pointed to the Tink statue and exclaimed, "Look, Bella! Its Tink from China!"


Me: You are Gran's granddaughter.

Bella woke me up at 3am this morning.


I think I just patted her head and went back to sleep.

I can't believe this beautiful child before me was just 5 lbs 12 oz five years ago! What a wonderful time we're having being her Momma and Daddy and Little Sister. Bella's got a long list of things she wants to do now that she's five so here's to another awesome year! 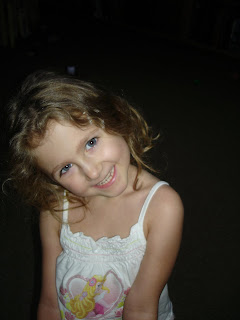 How Many Fingers Am I, Momma?

Babies are wonderful. They smell good, they are cuddly. They smile with unabashed love.

Toddlers ROCK. They are spunky, sparkly, argumentative, imaginative and smile as well as hug with unabashed love.

Ava's a yapper. She's been talking for a long time. At 2 1/2, she's at the stage where new and big words are very fun. She also creates her own words.

She loves to drink Dr. Peppermint.

Her Papa (great grandfather), who is very sick, needs alot of lovins.


Big words as of late:

Cussumuh - "We had two cussumuhs come look at the house, Mommy!"

Her facial expressions are hilarious. Eyebrows shoot up, eyes get huge. Everything is over the top and she makes lots of "o's" with her mouth when excited, which is often.

Her favorite person on Earth? Isabella. Ava is her big sister's mini-me with flair. And Bella's got plenty of flair of her own so you can just imagine the entertainment quality around here!

It is easy to get caught up in the every day chores of life but when I take a moment to sit still, I smile as I listen to my little girls pretend play in the other room.

"No Alice! Don't step in the fiery pit of the volcano!"

Rustling sounds. Grunting. (most likely because she's lugging Alice around the room)

Hubby had his 20 year high school reunion this past weekend. It was the strangest event I've ever attended.

Most everyone met at a downtown club on Friday night called 8.0. This was supposed to be the relaxed reunion before the formal reunion the next night (in other words, for those who didn't find it necessary to fork out $40/person for the real reunion).

At first, Hubster was over it. He had no interest in seeing people he hadn't seen since the 10-year reunion. He figured if they were really friends, they'd already be a part of our life.

Then Friday night rolled around. Old high school buddies were blowing his phone up with texts. At 5:30, he called me to say he really wanted to go. Fine by me. I've been busting my butt prepping our house to sell and an adult beverage along with adult conversation sounded appealing.

My MIL saved the day to watch the girls for us. She has a cousin visting and dumped her to watch her grandgirls till midnight. Now that's love!

Let me just say that I have NEVER seen my husband so nervous. He's not a nervous kind of guy! But he was a wreck Friday night. Too much beer gut? Would everyone notice his hair is thinning? He even picked out an outfit similar to what he might've worn in '89. I had to intervene on that one, of course.

After dinner, we went to 8.0. Hubby was worried (again, such unusual behaviour!) that we were the first ones there. He saw a friend named Paul. So, we were the second ones there. Former classmates started trickling in soon after.

Watching this 20 year reunion was just like a Ben Stiller type movie. People greeting one another with a total question mark on their face as to who's hand they were shaking. There were obvious comparisons of who looked different, fatter, better, weirder, balder than the last reunion. The women didn't even hide their contempt for some and surprise at others. Guys cursed one another in a jovial manner but there was a hint of true disdain sometimes.

And hardly any spouses of classmates were there. Isn't that STRANGE? My hubby had insisted I go. Why wouldn't a spouse want to see a glimpse of their loved ones' past? Shoot, I've already heard all the stories from the group of friends from HS that are a part of our lives. Numerous times. And yes, the stories get more exaggerated with each telling.

The hilarious and highlight of the evening was when we ran into "Jill". Hubby dated her most of high school and then dumped her in a not-so-gentle manner when he realized there were other fish in the sea. At the 10 year reunion, Jill still hadn't gotten over it. This time she tried harder.

There was idle chatter about who worked where, lived where, how many kids, are the folks still living here, etc. Then silence. Both Jill and Hubby were trying to not bail out rudely but neither had anything to say. So you could hear the crickets chirping. Really. We were outside on the club patio.

Finally, a friend who's a real-life friend showed up and, oh, the relief on my husband's face! I cracked up. Inside, of course. We said our polite goodbyes to Jill and bolted.

As the evening went on and the drinks were increasingly consumed, there was more laughter and less awkwardness. I was kind of suprised at how little reminiscing there was. Perhaps because 20 years later, high school's impact on who we are has diminished? Maybe because everyone has taken such vastly different paths in life? Some cling to the high school years, for sure. And there were definitely those who were on the prowl for a hook-up. Ew.

In all, I have to say that attending my husband's 20 year reunion has confirmed that I will not be attending mine. Sorry, former classmates! You'll just have to choose another Most Popular 20 Years Later.
Posted by Jennboree at 10:45 AM 3 comments:

Do They Still Make Calgon??

School is out. We're in the second week of summer and already my children are prepping for fall. While at McDonald's (Old McDonald's, they call it) the girls spent the entire time pretending to go to school. We've been pumping up how very awesome school is and now there's a slight possibility they won't even go there.

Why, you ask?
We've just put our house up for sale. After 8 years in this wonderful blessing of a home, we've decided to get the heck out of Dodge. Whether this will all happen at a mule's pace is beyond me.
We've also come up with a crazy ass plan. I have to say "crazy ass" cuz it is.
We PLAN to sell our house, move into a condo temporarily, sell our renter house, fix up my mother-in-law's house, sell it, move all our butts about 45 minutes away to a town outside of the Big City onto a couple of acres of land with a big house, a big pool and a lil' bitty house for my MIL.

Told you it was crazy ass.
The girls are thrilled. Bella wants a house like Tara. If you recall, that is the Colonial style home in Gone With The Wind. See what happens when you leave movie books laying around? Kids get ideas.
Speaking of my big angel, Bella will be five in a couple of weeks. FIVE!
I'm already loving leaving the 4's though. Like magic, she's been sweeter, more loving and helpful. Don't tell me it is just because her birthday is around the corner! LA LA LA LA...I can't hear you!
Ava is preparing for the theater stage. I'm sure of it. I can just imagine all the plays and musicals I'll be dragging family to for her.
She dresses in costume daily. She sings daily. Dances daily. Uses dramatic flair daily. Isn't the writing on the wall??
Prime example: We're at my parents' house for the weekend and my children are obsessed with the stairs.
Bella's playing in one of the bedrooms up there and Ava's already gone up and down at least 15 times. This is only annoying because I have mini heart attacks each time she goes up. My folks have THE steepest staircase ever and my girls can't seem to grasp the concept of going up those deadly stairs without peeping through the bars, striking up a conversation mid-flight, or balancing on tippy toes and twirling while climbing up.
I told Ava no more going up the stairs! Without blinking, she headed upstairs. When I asked her just what she thought she was doing, she looks over her shoulder and matter-of-factly says,
"I need to check on Bella. I have to hug her."
What do you say to that? Especially since we spend hours a day telling the girls to love one another and be kind to one another.
Just when you think you're smarter than they are...
I will try to post more often. Life is truly hectic. Keeping a clean house daily is ridiculous. I can't wait to move and be a slob again! 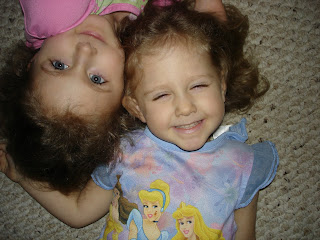 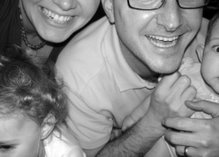